Kushma Bungee is famous as World's second-highest and Asia's highest normal bungee swing. The excitement of Kusma's Bungee Jumping provoked curiosity among the adventure lovers. In the lower regions of Himalayan magnificence, Kushma bungee is a new experience. It's unquestionably the experience aficionados list of things to get and container rundown to numerous people worldwide. In light of the Kali Gandaki waterway's crevasse, Bungee jumping in Kushma is one of the most adventurous activity includes the marvelous common settlement. Kali Gandaki is the deepest George in the world.

Join Kushma Bungee Jump Package with Hiking Annapurna for special discounts. Bungee Jumping in Nepal is one of the most well-known adventure activities. The world's second-most highest, generally energizing, and exciting Bungee Jumping lies in the Kushma Parvat, Nepal.

Alongside the tremendous all-encompassing perspectives in the Kaligandaki gorge in the Annapurna and Dhaulagiri mountains, the Kushma's suspension connects from where the Bungee Jumping is into activity. The Bungee Jumping is in the 520 m in a long suspension bridge, which associates Kushma of Parvat to the Balewa of Baglung. Bungee Jumping's height is 228 m., making it the world's second-most elevated regular Bungee hopping heaven. It is the highest Bungee jumping in Nepal.

It is One trip from Pokhara, and however, on the off chance that you need to investigate the higher amount of this region, it takes two or three days. The social ranges and normal magnificence of Kushma offer more to the world-class experience lovers in its brilliant settlement. Aside from the comfortable and comfortable clamors, investigate the world's second-most noteworthy Bungee Jumping in Nepal with the rush. Previously, Bhotekoshi Bungee jumping by last resort was the highest bungee in Nepal.

Kushma is home to three of the suspension extensions of Nepal and one mechanical scaffold. Walking around the suspension spans are energizing and courageous to many. Additionally, Kushma has everything. Kushma's Bungee Jumping took the experience in Nepal to the next level.

The heart beating rush of Bungee Jumping in Kushma is a critical movement to encounter. Likewise, The Kaligandaki's magnificence, with the tremendous Himalayan perspectives and the great provincial social attractions of Kushma, this Bungee Jumping is a movement that endures forever. Kushma unquestionably added another measurement to the experience devotees and pulled in many individuals with its massive contributions. 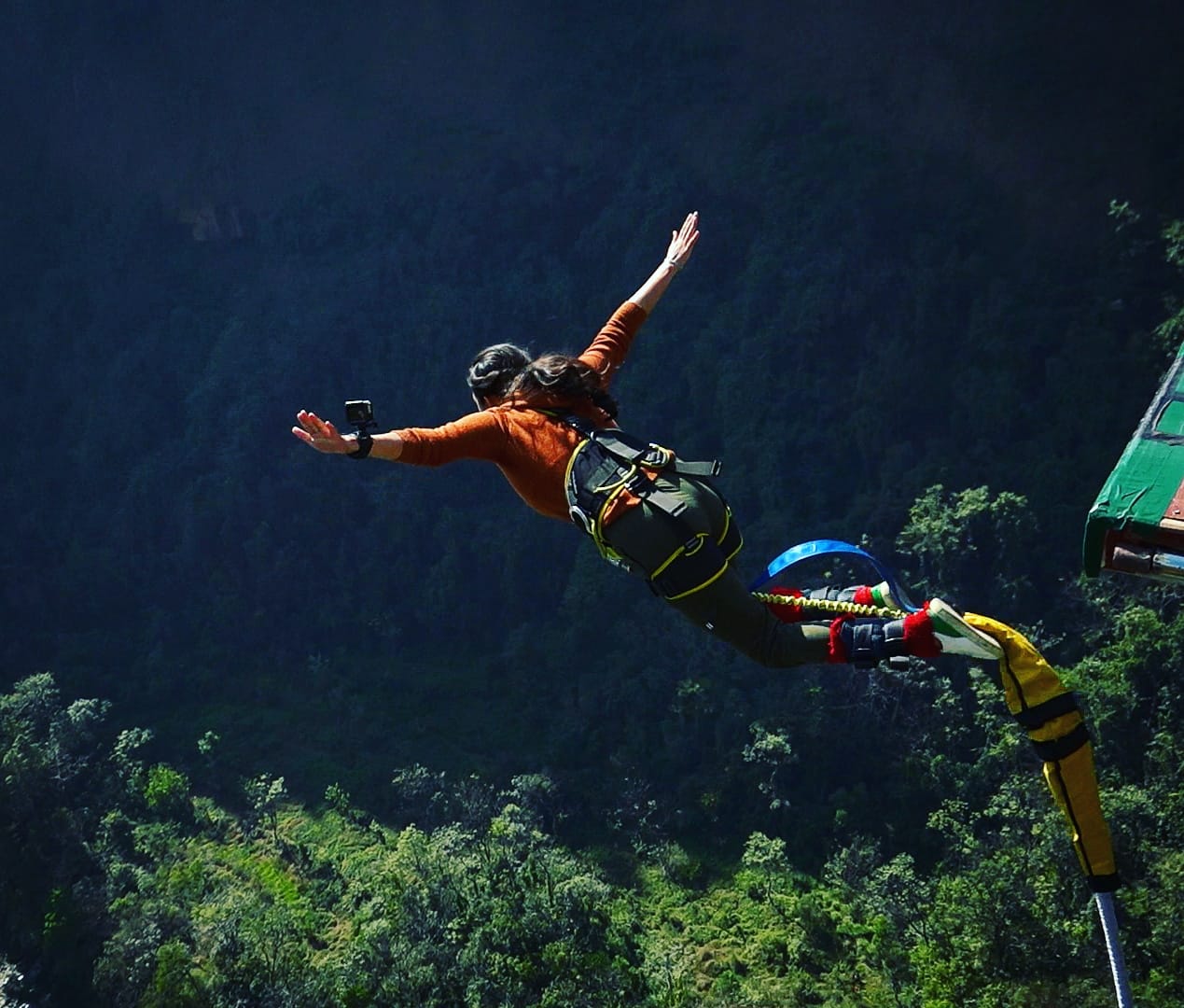 Here are the details about the Kusma bungee Jump height, Bungee, Swing, sky cycling cost price, the distance between Kathmandu or Pokhara to The cliff Nepal Kusma updates the highest Bungee in Nepal. Find The Cliff Nepal price list below.

If you wish to do both canyon swing and bungee, then you are getting the best price. The second jump is given a 50% discount, i.e., you will be paying only NRS 7000+3500=10500. The third jump is again special, making the price to NRS 2500; you are an adventure lover and wish to jump for the fourth time, then free. Transportation cost is not included in this package. But we can book you a cab for just Nrs 1000 per person from Pokhara to Kushma and back.

The above package includes Bungee or swing, Transportation and lunch in the cliff resort.

OVERNIGHT PACKAGES COST OF BUNGEE AND SWING IN KUSMA

The above overnight packages include:

The above Overnight package prices do not include transportation. If you need transportation, Pokhara Kushma up and down on a sharing basis: NPR (Rs) 1000 Per Person.

The height of the Bungee is 228 meters. Thus, the Kaligandaki river bungee is the highest possible Bungee in Nepal. The dip is at the suspension bridge. Similarly, the bungee region lies near Kusma, which is 262 Kilometers off from Kathmandu.

Height of The Cliff swing in Kusma

The cliff swing with precisely the same bridge linking Kusma and Baglung over the Kaligandaki river employing a height of 228 meters (749 feet ), is the world's highest Swing. Previously the Nevis Swing in Queenstown Newzeland was the highest Swing with 134 meters (440 feet). Unlike Bungee, Swing doesn't require rebound, but the autumn will supply you with a protracted amount of free-fall experience.

The trip starts right in the Kathmandu valley. 8 -10 hours drive plus you also get to the cliff in Baglung Nepal and see Nepal's most extreme game, among the world's highest bungee jump. The lodging and meals for jumpers are located at the magnificent The Cliff Resort Pvt. Ltd.

All the adventure lovers who are willing to bungee jump in Kushma are requested to book the package before reaching the Kushma. You can book the package by sending the booking amount to  +977 9843724104 Esewa id. Find the location of the Booking office for Kushma Bungee here. 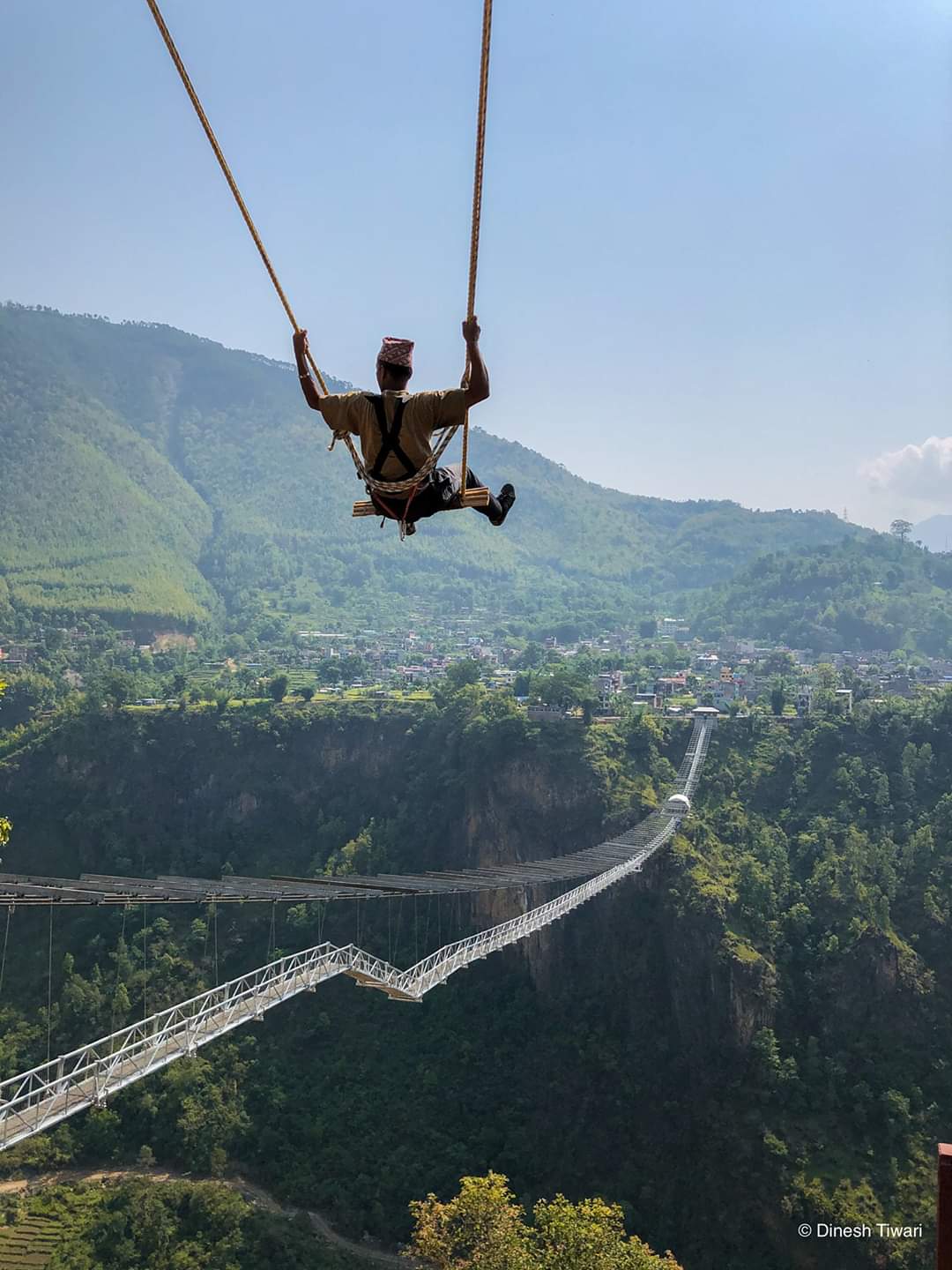 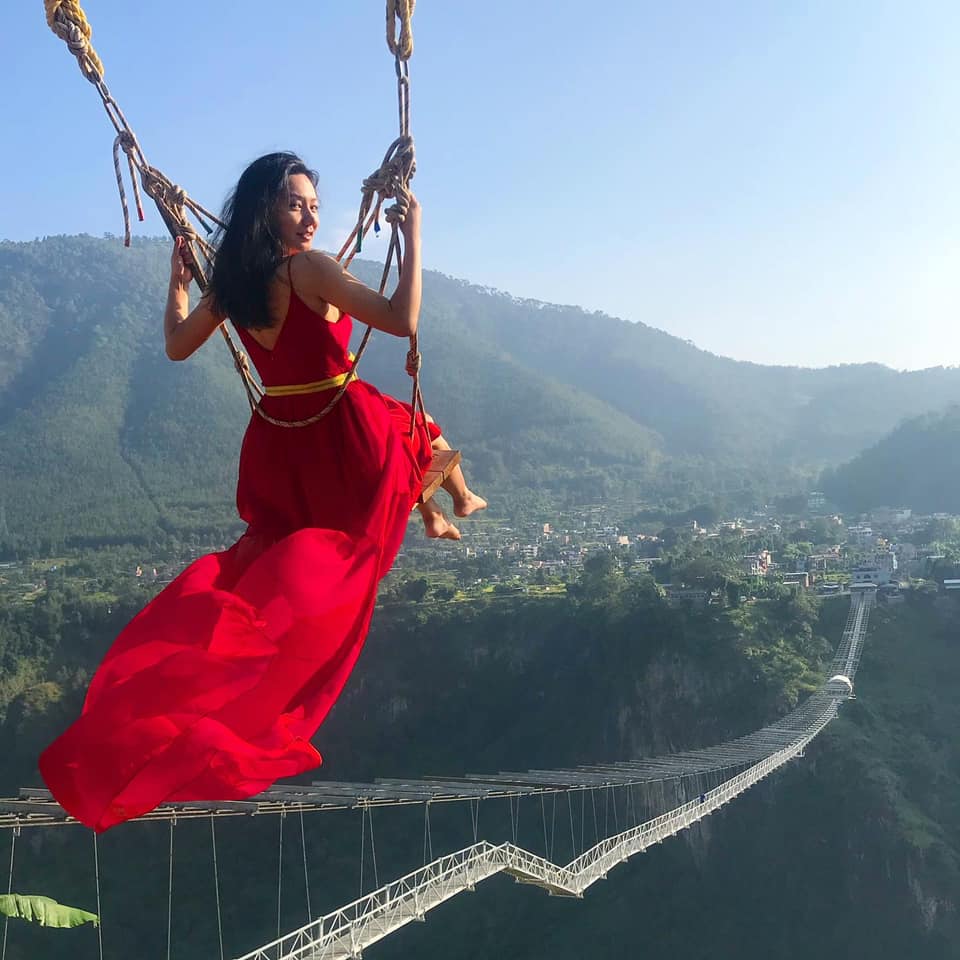 The below itinerary is from Kathmandu and the price may differ with the trip.

On your first day, we will drive to naturally blessed Pokhara, which is also the tourism hub in Nepal. We will roam around Lakeside and enjoy boating on the Phewa Lake. Later, during the evening, we will enjoy dinner by the shore of the lake.

Today, we will join other bungee enthusiasts from Pokhara, and we will drive to Kusma. On reaching Kusma, you will experience the thrill of Bungee. Later on the same day, we can return to Pokhara for an overnight stay. However, we can stay overnight in The Cliff Resort, and the next day, we can enjoy exploring the sightseeings in Kusma and Baglung.

Day 03: Drive from Pokhara to Kathmandu

Today, we are going to drive back to Kathmandu from Pokhara. If you wish to do some trekking, then you can do that from Pokhara or Nayapul. For new bookings, our standard cancellation policy is; Cancellation more than 48 hours in advance = 100% refund Cancellation less than 48 hours in advance = 50% refund. If you fail to arrive for your scheduled booking time your booking will be non-refundable. Please check your activity details carefully for your report time. A full refund will be provided if the jumpers aren’t able to jump due to technical issues, bad weather, or natural disaster.

Before you jump, make sure you’re well-rested, hydrated, and have recently eaten. Tell your Bungy Crew if you have any of the following; -High or low blood pressure – High myopia – Heart condition – Epilepsy -Broken or fractured bones/dislocations – Fragile skin – Neurological disorders – Diabetes – Asthma – Prosthetics – Panic/anxiety attacks – Any recent sprains/muscular injuries.

Please note the above list does not automatically exclude you from our activities, and the list is not exhaustive. If you have concerns about a condition not mentioned, please contact our team prior to travel. Unfortunately, we can’t permit pregnant activity-seekers or those with photosensitive epilepsy. And if you have a bone and spine problem or a recent concussion, we’ll need to see a doctor’s certificate. If you wear glasses? For safety reasons, they may not be able to be worn.

Tight shoes and comfortable clothes must be worn while jumping. Jumping is not allowed while wearing flip flops & loose-fitting shoes or other loose items.

For safety reasons, jumpers are not allowed to take cameras and mobile phones inside the capsule.

Since Bungy jumpers are jumped according to the weight group category, we kindly request all the jumpers to allocate the full day. Reporting time at the resort for the jumps is 9 AM in the morning.

Kushma Bungee and Canyon Swing By the Cliff Nepal FAQ

Is Kushma Bungee the Second highest bungee in the world?

Yes, Kushma bungee in Kali Gandaki is the second-highest bungee jumping after Macau Tower in China.

Which is the highest canyon swing in the world?

Kushma Swing in Kali Gandaki Nepal is the highest canyon swing in the world where you stand at 228meter (748 feet) and the freefall of 7 to 8 seconds.

How to reach Kushma Bungee and find The Cliff Nepal location?

You can hire Pokhara's vehicle to get to Kushma Bungee and return to Pokhara the same day. And if you're wondering about the price, you can take a morning bus into Kusma and take the following public bus to return to Pokhara. The Cliff Nepal is the operator of Kushma Bungee. The Owner of The Cliff Nepal is Raju Karki. Netra Parajuli, Nawaraj Paudel, Yubraj Joshi, and Ranjan Joshi are the main Investor for this adventure.
The distance from Pokhara to Kushma is just 60 KM. However, the road condition makes the trip longer than 3 hours to reach.

If you are from Kathmandu, we offer a full board package. So contact us for booking.

Is Kushma Bridge the Longest Pedestrian Suspension Bridge in the world?

Yes, Kushma bridge is the Longest Pedestrian Suspension Bridge in the world. The 567 meters long single-span suspension bridge connects Kusma of Parbat with Baglung district. The bridge is set to be registered in the Guinness Book of World Records as the longest pedestrian suspension bridge. Currently, the 494 meters long Charles Kuonen Suspension Bridge in Switzerland holds the longest pedestrian bridge record in the world. Some of the other bridges in Kushma are:

What is the best time to visit Bungee Jump in Kushma?

Bungee Jump isn't a sort of action that must be preferred by nature. Bungee Jump in Kushma may be done 365 days per year. It can be done any day if there is no rain. Having said this, a few particular months are more convenient to become involved in this fun experience.

What is the freefall time in Kusma bungeee?

What are the activities supposed to be done in Kushma, Parvat?

The primary activities in Kushma Parvat are

What is the Eligibility for Kusma Bungee Jump & Swing?

How can I book Kushma Bungee Jumping and find Kusma bungee and The Cliff Nepal contact number?

Enquire us from the inquiry form. You may also call us at contact number 9843724104 or email us at [email protected]

Book your Jump 24 hours before your jump. During weekends the reservation is full 3 to 4 days before.  Call 9843724104 for making reservation.

What Our Clients Say ?